The Flower Division (花組, Hanagumi) is the main force of the Imperial Combat Revue in the Sakura Wars series, as stars to the public and aces on the battlefield.

As part of the Imperial Army's anti-demon subjugating program the Flower Division stands as the frontline unit to combat demons with their spiritual power. The division is comprised of mostly as they possess the high capacity of spiritual power which is amplified through performance arts. The reasoning behind this was both spiritual and mental: song and dance were considered to be traditional methods that could suppress evil, and the stage was likened to a battlefield where self-confidence is built. Thus for the double entendre of the Grand Imperial Theatre's foundation as the Revue HQ, the division members perform on the theatre as their undercover alias.

However as of Taisho Year 19[1], the Great Demon War happened where the Combat Revues of Tokyo, Paris, and New York commenced Operation Twin Capitals as the final resort. Altogether, all three revues sacrificed themselves to seal the Archdemon inside Shadow Tokyo and restoring peace in the process. In high presumption that includes the whole Flower Division, only Sumire Kanzaki remains behind due to her circumstances[2] 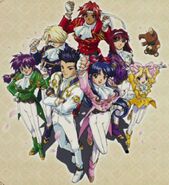