"Knock our future out of the park!"
—Gemini

Gemini Sunrise (ジェミニ・サンライズ, Jemini Sanraizu) is a member of the New York Kagekidan's Hoshigumi. She is the main female protagonist in Sakura Wars V: So Long, My Love and Sakura Taisen V Episode 0.

Gemini has long, curly red hair tied in a low ponytail and has blue eyes. She wears an orange cropped jacket over a yellow shirt, orange denim skirt with a brown bolster belt wrapped around her waist, orange gloves, orange boots and a brown Stetson hanging on her back.

A cheerful but clumsy cowgirl who traveled from Texas to New York on her master's dying wish. She begins the game as the theater's cleaning girl who has dreams of one day performing and becoming a part of the Hoshigumi and becoming a proper lady in the process. She has a very bright and friendly personality though she is prone to daydreaming. Gemini attempts to fit in with the people of New York but has a hard time due to her cowgirl personality. Because of this, she gets easily depressed whenever the other citizens see her as nothing more as a country hick, even considering moving back to Texas. Being trained as a samurai, she has a great love and respect for the Japanese culture and would love to travel to Japan herself someday.

She has a split-personality named Geminine who is aggressive and focused on avenging her master but honors the samurai code. Geminine was supposed to be a living person, however Gemini was the only one born and is described as having two hearts in one body. Geminine sometimes dominated the body when she was training with her master, though Gemini herself never knew of her existence until she got to New York where Geminine would dominate the body more often (which is mostly due to Gemini's depression). She has a white horse named Rally (Larry in the English-language version) that she keeps in her apartment but will occasionally ride him around New York. Gemini wields both a katana and a Colt Single Action Army revolver.

Gemini is the main character of this Japanese exclusive game, as she saves her hometown and makes her way to New York.

In films and television 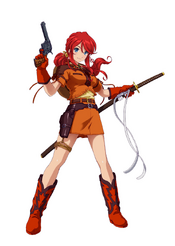 Gemini is one of the playable Sega characters in the crossover tactical role-playing game, Project X Zone. She is paired with Erica Fontaine.

Gemini is one of the playable Sega characters in the crossover tactical role-playing game, Project X Zone 2. She is paired with Sakura Shinguji.

Gemini is one of the playable Sakura Wars characters alongside Ichiro Ogami, Sakura Shinguji, Erica Fontaine and Shinjiro Taiga.

Gemini appears as a playable character in Star Ocean: Anamnesis as part of a collab with the franchise

Retrieved from "https://sakurawars.fandom.com/wiki/Gemini_Sunrise?oldid=12229"
Community content is available under CC-BY-SA unless otherwise noted.