The London Combat Revue (倫敦華撃団, Rondon Kagekidan?) is one of the national anti-demon squadrons in the New Sakura Wars series stationed in London, England.

One of the new combat revues established by WLOF stationed in London as England's new defense force. Based on the Arthurain legends, their combat division is named Knights of the Round Table (円卓の騎士, Entaku no Kishi?) where the revue addresses its members by knight order. 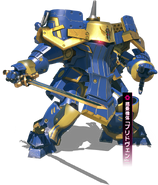