Taisho Year 30 (1941), the peaceful days have returned to the Imperial City of Tokyo after the new Imperial Combat Revue were victorious in the previous battle.

Sakura Amamiya becomes acting captain while Seijuro Kamiyama is reassigned to Europe on another mission. The Hanagumi's struggling days in the theatre continue until Seijurou temporarily returns along with an unknown girl.

Just who is Klara and the supposedly annihilated Moscow Combat Revue? A new battle curtain arises for the Imperial Combat Revue! 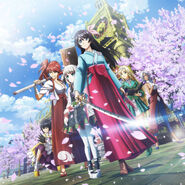