JP: June 23, 2000
Pocket Sakura (ポケットサクラ) is a digital pet developed by Sega, RED, Media Factory, Jupiter, and Nintendo, released alongside Sakura Wars GB. It was available as a standalone purchase or in a bundle with Sakura Wars GB. It shares a form factor and mold with Nintendo and Jupiter's previous digital pet, Pokemon Pikachu 2 GS, and has the same pedometer and clock functions. Pocket Sakura can be used on its own or it can communicate with either another Pocket Sakura or Sakura Wars GB for Game Boy Color using each device's respective infra-red sensor.

Pocket Sakura's gameplay revolves around taking series protagonist Sakura Shinguji for walks first around Tokyo, then Japan, then across Asia and Europe. Destinations are set through the menu and any steps detected by the built-in step counter will bring Sakura and the player closer to their goal. Once the destination has been reached the player can either continue to an adjacent location on the map or can explore the current area which has the opportunity to reveal a landmark of that area. Discovered landmarks will be added to the Gallery section of the menu. The goal is to explore as many areas as possible, encountering other characters from Sakura Wars along the way, including cameos from some Sakura Wars 2 characters.

Another feature of Pocket Sakura is the point system, similar to Pokemon Pikachu's 'watts', that allows the player to transfer currency to a copy of Sakura Wars GB where they can then buy things from the shop like items to help them through that game's Story Mode or unlock sound tests, mini-games, etc. Some items in Sakura Wars GB can only be unlocked by communicating with a Pocket Sakura including items that increase the stat boosts from the Cadet's training. Points can be gained by playing a game of 'Odds or Evens' where Sakura will roll dice and the player must guess if the number will be odd or even. 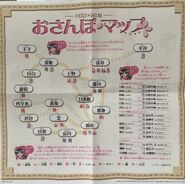 Map of Tokyo included in the box