"Excuse me for being a country girl!"
—Sakura to Sumire

Sakura Shinguji (真宮寺 さくら Shinguji Sakura) is the main heroine in Sakura Wars 1-4. She is a member of the Teikoku Kagekidan's Hanagumi.

Sakura has a long dark-blue hair tied in a high ponytail with a red ribbon and light-brown eyes.

She wears a pink kimono over a white gii with a purple sash wrapped around her waist, red hakama pants, white socks, black shoes, and brown fingerless gloves.

Sakura is kind, gentle and polite who can be somewhat clumsy and naive, but she has a bright and cheerful personality with a strong sense of justice and she constantly gets jealous whenever she catches Ichiro Ogami talking with another girl.

Being the newest member of the Flower Division wasn't easy for the naive newcomer. Sakura had to overcome her inexperience and prove herself to her comrades in order to gain the group's acceptance. In the end, however, she proves herself a loyal friend and her definite worth as an important asset of the Flower Division- both on the stage and on the battlefield.

Sakura Shinguji is the first girl the player sees in the game. Ichiro Ogami meets her in a park and she shows him the way to the Grand Imperial Theater.

In Manchester's Great Collapse!?, her character episode, we learn that she has a strong fear of lightning.

Throughout the rest of the game, the player has the choice to choose her as Ogami's girlfriend. If she is chosen, in the ending cutscene she leaves a letter to Ogami stating she is going home and she boards a train. After Ogami receives the letter, he takes Kohran's motorcycle and chases Sakura's train. As she is sitting down, Sakura sees Ogami and suddenly stops the train and jumps into Ogami's arms. She then apologizes to Ogami for leaving and they kiss.

Sakura Wars 2: Thou Shalt Not Die

Again, the player can choose Sakura as their love interest.

Sakura and the hero travel to Paris to meet Ogami. During her brief stay in Paris, she gets into a misunderstanding about Ogami with the Paris Combat Revue member Erica Fontaine.

10 years prior to the game, Sakura and her division, along with the combined efforts of the Paris and New York Revue, fought during the Great Kouma War to defend Toyko from destruction at the hands of Sotetsu Genan and a powerful archdemon. In an effort to protect the city, she along with her allies (except for Sumire Kanzaki, whose dwindling spirit energy has been completely drained by that point), used the 'Imperial Sword' to seal themselves and the archdemon into a shadow world version of Tokyo. At some point earlier before the operation, she saved the young Sakura Amamiya from a demon and indirectly inspired the child to follow in her footsteps.

Around the time of Yasha's broadcast at the opening ceremony of the World Revue Games, Amamiya assumed her true identity was Sakura Shinguji behind the mask after recognizing her voice. Sumire, now the current commander of the Imperial Combat Revue, refused to accept that Yasha is her as she believed her friend would not have fallen so easily. Sumire then revealed to the new Flower Division of the operation Shinguji and her allies undertook in the battle 10 years ago.

By the time of Yasha's attack on the Imperial Revue Theatre, Amamiya attempted to fight her one-on-one but was outmatched by a signature move used by Shinguji. This left Amamiya depressed afterward as she had no choice but to believe that her idol and savior is now Yasha, who now works to bring back the archdemon.

In a final confrontation with Yasha that ended with only Seijuro Kamiyama and Amamiya as the sole survivors of the Flower Division, her mask had fallen and revealed her to have demonic eyes. Finding out that Yasha is only a puppet pretending to be her, Amamiya took no effort into slaying her in a final duel. After Yasha's body disintegrate, a tied piece of hair drops onto the ground, implied to be how Yasha was created with Shinguji's appearance.

While Seijuro and Amamiya were temporarily stuck in the Tokyo battle of 10 years ago, Amamiya went and saved her child self from a demon. She then realized that whom she assumed was Shinguji saving her was actually her grown-up self all along that inspired her to become who she is today.

As Kamiyama and Amamiya were returning in their spiricle strikers through the void towards the present, Amamiya was being drawn towards the archdemon's hand. Unable to escape, the archdemon's hand dispersed into cherry blossom petals before it could grab her. The real Sakura Shinguji then appears before Amamiya in a vision and parted with her words that there is much left to do for the 'stage' awaiting her, by which the latter tearfully remarked that she saved her after all.

By the time Sotetsu Genan was close to breaking the seal on Shadow Tokyo, a burst of light and flower petals cleared the sky. The petals, imbued with Shinguji's spiritual energy, revived the members of the Flower Division that fell against Yasha and reinvigorated the exhausted members of the Shanghai, London, and Berlin combat revue for their final battle. Genan resentfully recognizes the light as her and took this as an act of her meddling in his plans once more.

In films and television

Sakura Shinguji is a samurai hero as a child in this OVA. As she grows older she develops her super robot and fighting strength, and Sakura enters the Teikoku Kagekidan.

Sakura plays a minor role in this OVA. She only plays a major role in the first episode, where she stops Goh Hinogami from killing Maria. Together, they destroy the Robot and later defeat the madman controlling it.

By the end of the OVA, Sakura along with the entire group hurries to a dock to bid Ohgami and Rafale farewell as he travels to Paris.

In this alternate storyline, Sakura is the primary protagonist instead of Ogami. Sakura develops her powers and confidence in this TV series as she and the Troupe battle demons attacking the Imperial Capital.

As much the other members, Sakura is also saddened and worried about Sumire's retirement. But after Sumire's words of encouragement for her best friend and being appointed by the same Sumire as her only one successor, she firmly takes strengh from Sumire's wish. Sumire's encouragement was, ironically, mirrored from Sakura some time later during the Great Kouma War that antecipated the events of Shin Sakura Taisen.

In the manga, Ogami is the main character and Sakura is the one who leads him to the Imperial Theater. 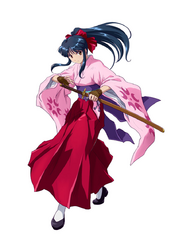 Sakura is a playable character in Hanagumi Taisen Columns and its sequel.

Sakura is a Sercet Character in Sakura Taisen V Episode 0 with your Koubu.

Sakura is one of the playable character alongside Ichiro Ogami, Sumire Kanzaki, Iris Chateaubriand, Kohran Li, Kanna Kirishima, Orihime Soletta, Reni Milchstraße, and Maria Tachibana as part of collab with the francise.

Sakura is one of the playable Sega characters in the tactical role-playing game Project X Zone. She is paired with Ogami.

Sakura is one of the playable Sega characters in the tactical role-playing game Project X Zone 2. She is paired with Gemini Sunrise.

Sakura is one of the playable Sakura Wars characters alongside Ichiro Ogami, Erica Fontaine, Gemini Sunrise and Shinjiro Taiga.

To Aru Majutsu no Index

Sakura also appears as a playable character in "To Aru Majutsu no Index MMO" as part of a collab with the franchise.

Sakura appears as a playable character in "Star Ocean: Anamnesis" as part of a collab with the franchise.

Sakura appears as a playable character in "Shoujo Kageki Revue Starlight: RE Live" alongside Erica Fontaine and Gemini Sunrise as part of a collab event celebrating 25 years of the Sakura Wars's franchise.

Sakura will appear as one of the playable Sakura Wars characters alongside Ichiro Ogami, Erica Fontaine, Gemini Sunrise and Shinjiro Taiga in "Super Robot Wars 30" as part of DLC 1. Sakura pilots her Koubu Nishiki from Sakura Wars 4.