Sakura Wars: The Radiant Gorgeous Blooming Cherry Blossoms (サクラ大戦 ～轟華絢爛～, Sakura Taisen: Gōka Kenran?) is a 1999 Japanese original video animation produced by Bandai Visual and Animate Film. It ran for six episodes and is the second OVA based on the Sakura Taisen video games. The episodes were released in VHS, LaserDisc and DVD formats.

Taking place after the events of Sakura Wars 2, the Flower Division heroines earned their rest and relaxation after the final battle against Keigo Kyogoku.

On the spring of the Taisho Year 15, the Imperial Combat Revue captain, Ichiro Ogami begins packing for his new abroad assignment in Paris. Amidst Ogami finds several belongings, each regarding those special maidens and starts reminiscing those special memories shared with them.

The chapters are side-stories set during the second and third games, viewed from a frame-story set after the second game. 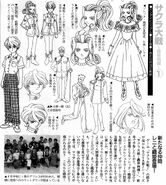 Retrieved from "https://sakurawars.fandom.com/wiki/Sakura_Taisen:_Gouka_Kenran?oldid=12489"
Community content is available under CC-BY-SA unless otherwise noted.