Sakura Wars: Kanadegumi (サクラ大戦奏組, Sakura Taisen Kanadegumi?) is a spin-off manga series by Team Kanade. It follows a girl named Miyabi Neko and her interactions with five attractive young men. The story takes place in Tokyo and centers on a secret division of the famed Imperial Revue named Kanadegumi. The manga has been serialized on Hana to Ume monthly magazine from 2012 to 2013 for 17 issues.

A girl named Neko Miyabi, who can see "sounds", arrives at the Imperial Capital of Tokyo to become an actress like her top star idols, the "Imperial Revue: Flower Troupe".

However, Neko was instead assigned to the male-composed orchestra accompaniment the "Imperial Revue: Kanade Division".

But the Kanade Division also has another secret, as the Imperial Combat Revue's secret Magic Obstruction Force, whose mission is to protect the capital from demons and spiritual attacks. To top it all off, Neko is appointed as the captain!

Neko was now both delighted and worried that she got more than she ever dreamed as it involved conflicts against demons. But as time passed with her fellow members, Neko learns how much important her ability to "see" sounds to protect those around her.

From the "Sakura Wars Kanadegumi ~The Breezing Serenade~" stageplay held in September 19, 2013, the full voice cast recording, along with the new songs Warera Kanaderu Kono Oto de and Haru yo Koi Haru yo, is now officialized for CD release on April 30, 2014.[1]

10 months after the Sakura Wars Kanadegumi ~Elegant Harmony~ performance, the studio recording version CD of the stage cast that was requested much has been finally released! Starting on Thursday, September 19, 2013, where the Breezing Serenade performance is held, limited versions will be sold exclusively at various event venues, so don't miss it![2]

Following the Sakura Wars Kanadegumi ~Elegant Harmony~ performance on last November, the vocal CD album featuring all solos from the 5 Kanade Division males, and voice-cast recordings will be released on Wednesday, April 24, 2013![3]

The 2nd Kanadegumi Drama CD, a harmony compiled with feelings. Neko learns of the upcoming "Kanade Dormitory Concert" from the dorm manager, Sho Seiryuin. An enthusiastic Neko converses with the Kanade guys about what to perform, but things go in unexpected directions from their respective thoughts. Will they all come together in time to succeed this concert?[4]

Now on sale, the first press limited edition of the Sakura Wars: Kanadegumi Volume 1, will be included a full version of the theme song followed with an animated PV, released on Wednesday, November 28, 2012![5]

The first Kanadegumi Drama CD will be released on Wednesday, November 28, 2012! A drama CD with a glimpse of the daily life of Neko Miyabi who arrived in Tokyo to join the "Imperial Revue: Flower Division", and the 5 members of the "Kanade Division". In addition, cast comments by performers are also included.[6]

The stageplay "Sakura Wars Kanadegumi ~Elegant Harmony~" will be held at Zen Zensai Hall / Space Zero, Tokyo, for 11 days from Thursday, November 1 to Sunday, November 11, 2012 (total of 14 performances).  Based on the manga serialized in "Hana to Yume" (published by Hakusensha), we will deliver a new story from the encounter between Otoko and Hugo to joining the ensemble. As in the previous "Sakura Wars", the lyrics are written by Oji Hiroi and composed by Kohei Tanaka, including the theme songs "Enmaikyoku, Kimi ni" and "Prelude Prelude".

The stage “Sakura Wars Kanadegumi ~The Breezing Serenade~” will be held at the Tennozu Galaxy Theater in Tokyo for five days from September 19 (Thu) to September 23 (Mon / Holiday), 2013 (8 performances in total) DVD has been decided. This is the second performance of a new group that has joined the world of Sakura Wars.

The main story is based on the manga serialized in "Hana to Yume" (published by Hakusensha), containing a complete original story with new characters. It is a content that even those who already know the manga version can enjoy it. Volume up in all lines, songs, dances, and swords than the previous work. Please enjoy the story of "Kougumi", which is drawn as an entity that supports the Imperial Flower Set in the shadow of the world view of "Sakura Wars".

As a video privilege, the cast itself is shot from the rehearsal hall to behind the scenes, and the unique “Sougumi Camera” and the “Chiaki Raku Document”, which is closely related to the ad-lib and laughter, are included. By combining the main story with the bonus, you can enjoy the stage "Kanadegumi" even more. 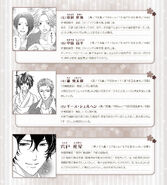 Add a photo to this gallery

Retrieved from "https://sakurawars.fandom.com/wiki/Sakura_Wars:_Kanadegumi?oldid=12915"
Community content is available under CC-BY-SA unless otherwise noted.