Sakura Wars: The Gorgeous Blooming Cherry Blossoms (サクラ大戦 ～桜華絢爛～, Sakura Taisen: Ōka Kenran?) is a 1997 Japanese Original video animation (OVA) created by Bandai Visual and Animate Film. It ran for four episodes and is the first OVA based on the Sakura Taisen video games. The episodes were released in VHS and LaserDisc formats.

1919: Dangerous mechanical soldiers are descending on the capital. However, the Kanzaki Heavy Industries engineers have developed steam-driven robots to fight the advancing forces--if only the right pilots can be found. Enter the Flower Division, a squad of young women from around the world who are up to the challenge--if only the right leader can whip them into shape in time! Based on the hit video game in Japan, SAKURA WARS follows the exploits of a team of female psychic recruits who are to do battle with the Black Root of Evil using steam-powered robots. In these episodes, the girls get cocky after a fairly sloppy victory and a number of rivalries flare up within the group. It's up to Ichiro Ogami, a young sailor who was just recently promoted to Officer rank and lead these feisty females for the big battle.

The first 3 Acts of this OVA serve as a prequel story arc to the first game. The last episode takes place somewhere in the middle of the game. 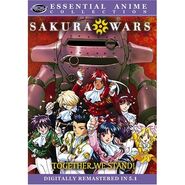