New Sakura Wars (新サクラ大戦, Shin Sakura Taisen) Is the latest main entry game in the Sakura Wars franchise. The game was released in Japan and Asia on December 12, 2019 and the rest of the world on April 28, 2019. Unlike the previous mainline Sakura Wars games which were developed by Red Company and Overworks New Sakura Wars was developed internally by SEGA. Now SEGA is not only the publisher and rights holder but now the series' new developer.

Like the previous entries in the series, New Sakura Wars was built as a Dramatic Adventure Game with the player not only fighting enemies but also interacting with teammates. In the adventure part, you can freely explore the Grand Imperial Theater and the city of Ginza created in 3D graphics, and enjoy conversation with members of the Imperial Combat Revue and their various stories. In your conversation with various characters you use the LIPS system to make many choices which influences you relationship with that character and influences the ending you get. The battle part is an hack en slash action battle system in which you play as Captain Kamiyama and also switch between the members of the Flower Division. In battle you make full use of the individuality of each character and their unique and deadly attacks to defeat the demons that stand in your way.

New Sakura Wars takes place in Taisho Era 29 (1940), twelve years after the events of Sakura Wars: So Long, My Love. Ten years before the events of the story, an event known as the Great Kouma War devastated the Combat Revues of Tokyo, Paris, and New York, and their members have been missing since. Despite this, new Combat Revues were formed by other countries and a competition called The Great Combat Revue World War was to be held.

In the Imperial Capital, Tokyo, former Imperial Navy Captain Seijuro Kamiyama has been tasked with leading the Floral Division of New Combat Revue of Tokyo. Not only must he fight against the threat of the Kouma, but he also must help bring the Imperial Theater back to its former glory.

Project Sakura Wars was first revealed at SEGA Fes 2018 with a short teaser trailer. Shun Nakamura of SEGA CS2 revealed that the team behind Valkyria Chronicles would be working on the project. At SEGA Fes 2019 the title was officially unveiled with a reveal trailer. Shortly after, SEGA also announced Project Sakura Wars would be seeing a release in the West as well as Japan and Asia.

Long-time composer Kohei Tanaka will be returning to compose the score while the story structure will be handled by Jiro Ishii, the writer of 428: Shibuya Scramble. Project Sakura Wars is the first title whose character designs are not done by Kosuke Fujishima but by Tite Kubo, best known for his long-running manga Bleach. 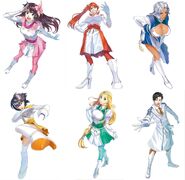 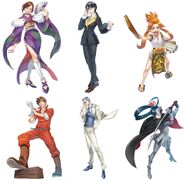