"Sakura Wars" is one of Japan's most popular video game franchises. The games are set in a steampunk world similar to the late-Industrial period, during which steam-powered armor, magic weapons, spirit weapons have emerged. These weapons exist to combat the appearance of demons which spread darkness and disrupt daily lives of humans. The Flower Division of the Imperial Combat Revue is composed of girls with exceptional spirit energy. These girls use their spirit energy to power special weapons such as their Koubu armors to destroy invading demons and protect the peace of human cities. This game combines beautiful choreography, enthusiastic yet aspiring stories, romantic encounters, and heavy steampunk elements seamlessly, offering an unique experience.

This mobile game will respect the original games' setting and style, the game follows the ARPG model which provides a fast-paced, challenging, and overall exciting gameplay experience. The overall controls of the game are simple and easy, without spending a lot of effort on micro-managing.

Features of the Game:

To commemorate the 20th anniversary of the first Sakura Wars game, the story of Sakura Wars Chronicles will expand on the original storyline...……

Exquisite 3D drawings displayed with stunning quality, cute 3D Chibi characters but realistic styled backdrops, dozens of heroes from the original games await to be recruited by you!

The game's art quality is very eye-catching, it'll lets gamers not only relive the original storylines and feel nostalgic, but also enjoy them with the best visual enjoyments.

The game was announced for an exclusive Android beta on May 10th, 2017 at 11:00 a.m. The beta was meant to test the open PVE story and PVP duel field, the open mission achievement system, and the open roles and Lighting Fast Fighting training system. The beta was released and lasted for several days up until the beta period ended on May 16th at 12:00 a.m. No new news has been released about the game's full release date. 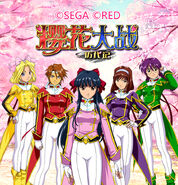