View source
watch 01:36
We're Getting Mutants in the MCU - The Loop
Do you like this video?
Play Sound

The Shanghai Combat Revue (上海華撃団, Shanhai Kagekidan?) is one of the national anti-demon squadrons in New Sakura Wars stationed in the municipality of Shanghai, China.

In 1940, the Revue serves as the protectors of Tokyo instead of the Imperial Combat Revue who have become a sign of mockery and humiliation to their abysmal plays and uselessness.

One of the new combat revues established by WLOF stationed in Shanghai as China's new defense force. They function as the local protectors of Tokyo before the Imperial Combat Revue's reassembly. 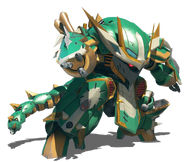